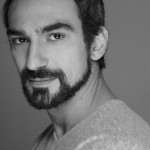 Daniele Gatti, actor, is a graduate of the Teatro Stabile di Genova (Genoa Repertory Theater & Academy of Dramatic Arts) and has studied at the Actors Studio in New York under Geraldine Baron. He has been a member of the Actors Centre of London since 2001.

Daniele has been directed on the stage by Henning Brochaus, Roman Polanski, Luca Barbareschi, Anna Laura Messeri, Massimo Mesciulam, Marco Sciaccaluga, and Andrea Liberovici. He has appeared on television in the series Distretto di Polizia, Camera Cafè, Piloti, and Crimini, and has worked in film with Giuseppe Ferrara, Silvio Soldini, and Sylvia Berchtold. For the last five seasons, he has been the Genoa International Poetry Festival’s official actor-in-residence, and he played the male lead (Joseph) in the musical Maria di Nazareth (Mary of Nazareth) with music by Stelvio Cipriani; the program was performed in the Vatican’s Paolo VI Hall and carried on the Italian state television network. Currently, he is appearing in Terra Santa, Andrea Liberovici’s permanent theater-video installation on display at the Commenda di Pré at Genoa’s MUMA (Marine Museum). He played the lead role (father Gabriel) in the musical The Mission – Heaven on earth with music by Ennio Morricone and he performed Francesco of Assisi in the theatral play A Francesco.

Daniele has provided voiceover and narration for Equal Opportunities for Health/Doctors for Africa-the University of Padua Program for Medical Missionaries, in partnership with the European Commission and the University of Florence, as well as for a documentary on the “Borexino Project” underway at the National Institute of Nuclear Physics and for many italian audioguides in the main archeological sites in the world (St Sofia – Istambul, Goreme valley archeological site – Turkey, Musèé de la Grande Chartreuse – France, Cecilienhof museum – Germany, Grand Central Station – New York,  MuMa Marine Museum, Italy, Gros Horloge Rouen – France .

He served as official presenter of the World March for Peace and Nonviolence in Genoa in 2009 .

Daniele is the author of Il Caso Lourdes: Storia, Testimonianze, Miracoli, published on the occasion of the 150th anniversary of the apparitions of Our Lady of Lourdes, supported by the Regione Liguria and sponsored by UNITALSI, the Italian League for Special Needs Pilgrimages to Lourdes and Other Holy Sites. The book has sold more than 4,000 copies, and proceeds go to support the Claudia Koll project for the construction of a rehabilitation center for the disabled in Ngozi, Burundi.